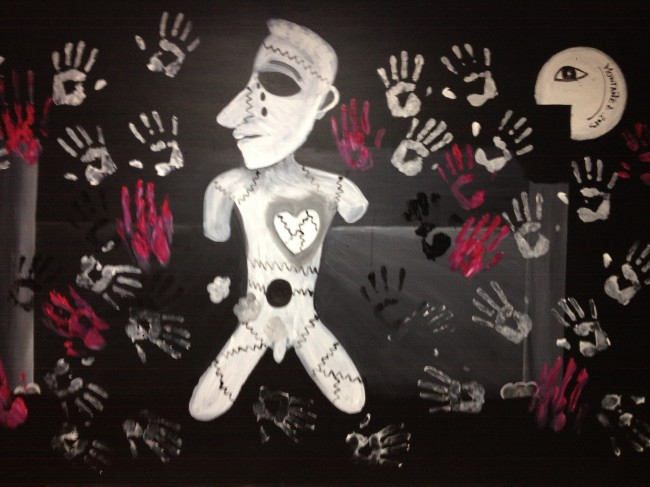 I painted this picture to leave all the pain I have felt in recent months in print. I knew it would be black, but I never imagined I would suffer so much in terms of its creation before I could at last sign it.

The same feelings I felt and had forgotten returned to me. It was like returning to the back of the cave when I was almost seeing the light. Tears and a knot in my stomach that again left me barely able to eat.

I started it in early April but I should have done it during the months of January and February, when the suffering was till in full blast. I could not paint it at that time because, as I have reflected in the work, I was left psychologically without hands or legs. Immobile.

The colour black which pervades it all symbolises that I did not have the presence of mind to get up and understand the situation that was happening to me.

Black tears come out of the sockets because my eyes did not see what I wanted to see and could not see anything else. In the stomach there is another black hole that symbolises the wound in the emotions, which went right in and broke up everything in its path: my beliefs, dreams, experiences and even my innocence remained there.

It had some roses that I could not paint but I know they are there. I look and see them.

The moon the shape of a brainteaser and symbolises the turns I have taken to get to the same place: the acceptance of reality.

Coloured hands speak to me of the good things that have happened during this period of pain and the learning process that has accompanied this stage. They symbolize that I felt it, experienced it, transmuted it and I can move forward without rancour, with a new and eager soul for what life brings me.

This picture effectively paralysed my pace of work. Every time I went into the studio my hands kept going to the black paint and after two minutes I had to get out of there. It was like facing a demon that paralysed me and drove me to lie down in bed. After four or five days I would go back again for him, but again he would win the battle. This is how the whole month elapsed.

I feel good because that pain is already out of me and has not taken possession over my studio. I will not have to see it in there inside and I know that now the COLOUR will return to my work.